S'abonner
No Result
View All Result 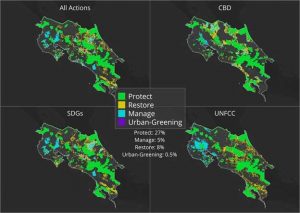 These ELSA maps of Costa Rica show regions that are suitable for protection, management, and restoration in coordination with three different conventions: The Agenda for Sustainable Development (SDGs), United Nations Framework Convention on Climate Change (UNFCC), and the Convention on Biological Diversity (CBD). Maps: Open Street Map and Carto

The year 2020 was considered a “Super Year” for biodiversity. A string of interconnected events offered a unique opportunity to build a global coalition and international policy framework that recognized the central role of nature to all life on Earth.

As nature conservation could contribute over a third of climate solutions, these negotiations offered a golden opportunity to narrow down the gaps between these multilateral agreements that are critical for the future of the planet.

Instead 2020 has become a year in which nature has shown humanity that we have pushed the planet to its boundaries. UN Environment Programme’s Executive Director Inger Anderson warns that “nature is sending us a message.”

COVID-19, wildfires, locust invasions, and record heat waves show the catastrophic impacts of climate change and biodiversity collapse. And these are only harbingers of what is to come if humanity does not change course.

With both the UN Biodiversity Conference and UN Climate Conference moved to 2021, we have an opportunity to reflect, in a way unthinkable even six months ago, on individual, societal, and political norms of “business as usual”.

We must explore innovations that recognize the fundamental role of nature in everything from corporate bottom lines, to human well-being, to the survival of life on Earth.

What is known as the Fourth Industrial Revolution has brought with it incredible changes in technology that have the potential to transform societies. Approximately 2,200 satellites now circle the earth. Spatial data can produce maps of forest cover and loss, human settlements, city watersheds, and agricultural production.

Geospatial technology on the ground can complement this view, offering a means to map local and Indigenous knowledge of unique ecosystems. This is essential for addressing extinction, ecosystem destruction, and zoonotic diseases such as COVID-19.

Both Costa Rica and Uganda recognize the vast potential of spatial data to support the creation of a transformative post-2020 Global Biodiversity Framework for the UN Biodiversity Convention, which also capitalizes on synergies with the UN Climate Convention.

Costa Rica is one of the world’s only country that has managed to reverse deforestation, and is pioneering a bold Decarbonization Plan. Uganda, a leading force for conservation in Africa, is playing a critical role in advancing the UN Biodiversity Convention. It is co-chair for the development of the post-2020 Global Biodiversity Framework, playing a critical role in guiding the global community to the international commitments that are widely seen as an essential opportunity for governments to put biodiversity on path to recovery when the Framework is adopted at COP 15.

In partnership with UNDP, the National Geographic Society, University of Northern British Columbia, Global Environment Facility, and The Gordon and Betty Moore Foundation, Costa Rica and Uganda are leading the way, along with additional pilots in Colombia, Kazakhstan, and Peru, to use spatial data to map ‘essential life support areas’ (ELSAs).

These are areas that conserve critical biodiversity and provide humans with food, water, and carbon storage. ELSAs can determine which regions should be prioritized for protection, management, and restoration.

In Costa Rica, UNDP and the Ministry of Environment and Energy (MINAE,), and the Center for High Technology (CENAT) have created an interactive web tool that generates ELSA maps based on the country’s targets for nature, climate change, and sustainable development.

MINAE plans to use ELSA maps to identify areas for inclusion in Costa Rica’s new Payments for Environment Services Programme (PES). This will help identify natural areas critical for carbon sequestration, natural beauty, water and food, and cultural heritage as well as compensating landowners who engage in protection, reforestation, or agroforestry.

Uganda’s policymakers are particularly interested in nature-based solutions for livelihoods, climate resilience and disaster risk reduction which is a key priority given the county’s recent disasters of landslides and flooding.

The ELSA approach can guide the development, implementation, and monitoring of progress for the post-2020 Global Biodiversity Framework in Costa Rica, Uganda, and other countries around the world.

While Target 1 relates to land and seas under spatial planning, ELSA can help to identify actions that capitalize on synergies across proposed Target 2, on protecting and conserving at least 30 percent of the planet; Target 7 on increasing contributions to climate change mitigation, adaptation, and disaster risk reduction from nature-based solutions; and Target 5 on controlling and managing invasive species.

Additional post-2020 Global Biodiversity targets that ELSA can contribute to include Target 9 on supporting the productivity, sustainability and resilience of biodiversity in agricultural and other managed ecosystems and Target 10 on ensuring that nature-based solutions contribute to regulation of air quality and water provision for human well-being.

Mapping essential life support areas will be key to identifying where nature-based solutions should shape commitments to the post-2020 Global Biodiversity Framework. By using ELSA to run scenarios before entering negotiations or setting policy targets, countries can see what is achievable.

COVID-19 may have pushed the establishment of the post-2020 Global Biodiversity Framework and the final agreement on NDCs until 2021, but action on biodiversity loss must occur now. To halt the sixth mass extinction, at least 30 percent of the planet needs to be protected by 2030. A daunting task, but Costa Rica, Uganda, and their counterparts are leading the way.